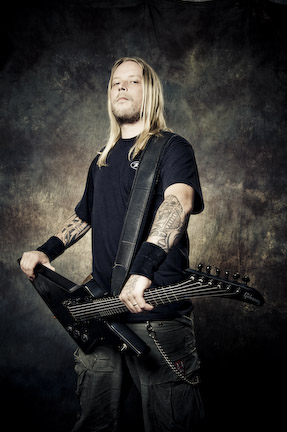 I was a week or so late in listening to In Flames newest album, Siren Charms, which came out way back on September 9th. I had put it off not only due to being busy catching up on records by bands that I actually still harbored affection for, but in large part because I was rather disoriented by the pre-release single “Through Oblivion”. When I finally sat down to listen to the full album, I was so thoroughly disappointed by what I was hearing that I decided to not waste any more time on it. I was going to stick to that plan until I read through the flurry of news articles published last week regarding recent social media comments by ex-In Flames guitarist and founder Jesper Strömblad. As the story goes, Strömblad had invited fans on his Facebook page to ask him anything, and as expected the majority of the questions were in regards to his departure from In Flames in 2010. He decided to write a post to address this ultimate question for everyone and in doing so he delivered a revelation that I don’t think many were expecting (certainly not I). I’ll let Strömblad speak for himself for clarity’s sake:

“Will I ever return to In Flames? No one never knows what the future brings,but the chances are slim as they embarked on a different musical journey,they have a solid lineup and Im on a totally different path in life right now. I would never go into details why I quit, but there is always one official story and there is the other……Alcohol is a quite small part of it. That can also answer the next question, what do I think of their new stuff. Listen to The Resistance and that explains a bit of it. We simply went different directions. I need to stand behind and feel inspired with what I do 100%, I owe it to the fans and obviously the band. All respect to In Flames and their new approach, but for me the band was a guitar/riff based melo-death band. And Its not anymore, but still amazing musicianship and I don’t think its wrong. But its not the vision I had when we started out.” – Jesper Strömblad, 9/30/14

Sometimes, as in the recent situation with Queensrÿche, its hard for entrenched, long-time band members who are reliant upon the band’s touring activities to provide the bulk of their income to simply walk away due to musical differences or general dissatisfaction. I mention that because In Flames transition to its modern sound really started way back on 2004’s Soundtrack to Your Escape (and it could be legitimately argued that it began on 2002’s Reroute to Remain), and as such that means that Strömblad stuck through at least six years and three albums of increasingly drastic musical changes that veered sharply away from the band’s classic era “guitar/riff based melo-death”, as the man himself so succinctly described it. Comparatively the guys in Queensrÿche had to endure a decade’s worth of Geoff Tate’s hideous transforming of that band into a shell of its former self before they found a viable way to extricate themselves by doing a little firing/hiring. Strömblad didn’t have a similar option within In Flames. Complicating matters was the fact that the band was his creation, and it was an increasingly lucrative job after all  —- I completely understand why he stuck it out as long as he did. When it was announced that he was leaving the band, an on-going battle with alcoholism was listed as the sole factor in his decision to walk away from a rock n’ roll lifestyle. A clean break perhaps… one even publicly lauded by the remaining band members as they (genuinely, I’m sure) wished Strömblad well in his recovery attempts. Of course in light of Strömblad’s recent comments, I’ve seen more than a few internet jokers suggesting that Strömblad has inadvertently revealed the cause for his alcoholism.

I’ve written about In Flames once before, and as I expressed in that article, In Flames’ musical discography can be viewed as consisting of two distinct eras: The classic 1994-2000 era where the songs were written around the primary guitar-based melodies, and the Friden influenced 2002-present day era where the vocal melodies took prevalence within the songwriting. Its not just a simple case of substituting one for another, as the change to vocal-melody driven songwriting effectively nullified most of the elements that made us In Flames fans in the first place. Its been a suspicion of mine and many others that this seismic shift within the band’s musical approach had their source in the band’s vocalist Anders Friden. That’s not exactly breaking news to any fan of classic era In Flames —- if the metalcore meets Depeche Mode mess that was his Passengers side project didn’t clue you in, then certainly the prevalence of clean singing within new In Flames material was the biggest flag waver. It couldn’t have been all on Friden, because if everyone else in the band felt the opposite, he’d have surely been removed or left of his own accord at some point, right? These days it appears increasingly obvious via songwriting credits that In Flames guitarist Bjorn Gelotte has been Friden’s major partner within the band’s ranks helping him to mold their vocal driven style. Friden has made some recent comments that give credence to that theory, stating in an recent interview:

I think [Jesper’s departure] was bigger for people outside than it was for the band. I think Jesper, mentally, had already been out of the band for a few years before he left. He was actually not touring for almost a year-and-a-half before we made the decision and he exited the band. On a friendship level, it’s hard. I miss the guy, but at the same time, it just didn’t work. People should know: Both Björn and I have done 10 out of 11 In Flames albums. We know how an In Flames album should be done. Musically, it didn’t change as much as people think. – Anders Friden in Alternative Press, 2014

Strömblad’s revelation makes me wonder as to how long he was feeling alienated within his own band. I also am more inclined to believe that there was gradual shifting of power within the lineup from Strömblad (who essentially was the lead music writer during their classic era) to Friden beginning around the Reroute to Remain era. All of this speculation is purely retrograde and of no real consequence of course, but we’re fans and that’s what we do. His comments come as somewhat of a relief to myself in that they help to suggest a sequence of events that explain why a great band capable of writing majestic, breathtaking, folk-infused melo-death could shift so far away from what made them great. It contextualizes those few moments I would hear on those post-2002 albums that would perk my ears up with their vague recollections of their classic era, such as the guitar solo in “Come Clarity”, or on “Vanishing Light”, where the guitars drove the melody as in the old days. They were moments where Strömblad was breaking through to interject some old school spirit into the mix.  I also feel a certain amount of gratitude and sympathy for Strömblad in general: Gratitude for what he’s done for me as a metal fan with that classic era of flawless work, and sympathy for the way it seems he was slowly ousted from his own band. He wrote in this post that listening to his new band The Resistance would provide all the answers anyone needs as to his view on current In Flames —- and while I’m not entirely sold on that project’s one album, it does harken to shades of his Ceremonial Oath past with its slightly melodic take on death metal. Its certainly a lot closer to what I really want to hear from him than he was capable of achieving during his final years with In Flames.

As for Siren Charms, I’ve listened through it a few times and keep coming to the same conclusion: This is the sound of a band that has little to no interest in metal anymore. Some melodic guitar figures aside, it bears scant resemblance to even their modern metal era work. Vocal melodies are the back bones of these songs, and the possibility of interesting guitar work is given limited, fractional space at best. More disconcertingly, the songwriting is more prone to uninteresting, plodding, meandering riffs that to serve as a rhythmic backdrop for Friden’s wavering vocal work in bridge sections. In fact he hardly screams at all on the album, and when he does its simply to accentuate a repeating chorus in order to spice things up —- the rest of the time he is firmly fixed in clean vocals mode. Granted, there are moments where he delivers his best work to date in that vocal style, but those of us who have seen him live in the recent past know that its a mirage: He sounds decent in a recording studio with the aid of overdubs, punch-ins, and the ability to get the best possible take. He is hopelessly miserable at emulating those results on stage however, and its in those live situations where the band further distances itself from their classic era. Friden’s reluctance to play older songs is justified by his most likely truthful observation that there are more fans of their post-2002 work at their shows than people clamoring for their old classics. Its slightly tragic for those of us that used to call ourselves fans of the band, because there aren’t many reasons to see their live shows anymore, let alone buy their new albums.

My personal irony here is that after the release of 2011’s Sounds of a Playground Fading, I accused the band of hypocrisy for mocking fans who clamored for a return to their classic sound while simultaneously repeating themselves musically for their past few albums. It seems In Flames has taken criticism like that to heart, as no one can deny that Siren Charms is a new direction indeed. There’s hope for us Strömblad fans however, as he also mentioned that he’s working on a solo album, and here’s hoping its something that taps into that classic era spirit. I met Strömblad outside of a dusty venue in Houston on their 2003 Reroute to Remain tour, and I mentioned to him that he should consider recording an instrumental solo album, maybe something half electric and half acoustic (because no one did drop in acoustic interludes like Strömblad). He just smiled and asked “Who would be interested in that? Just you?”, and proceeded to walk inside for sound check. Just me and legions of forgotten In Flames fans Jesper —- legions.