Awhile back in August of 2014, I wrote a piece on the continuing delays that surrounded Wintersun’s Time Pt II. It got noticed by a handful of their fans and linked on the band’s Facebook page where it made quite a stir (even eliciting a few disapproving comments from Jari Mäenpää himself). My main criticism in that piece was his attempt to deploy crowdfunding to circumvent his deal with Nuclear Blast who according to Mäenpää weren’t helping him achieve his artistic vision with adequate resources. Nuclear Blast had responded and the result was an ugly fight in the metal press, one that saw many people even outside of the Wintersun fandom taking sides. While I did side with Nuclear Blast to a certain extent, I think the source of my frustration was that I also considered myself a fan of the guy. The band’s 2004 self-titled debut was (and still is) an electric mix of speedy Swedish melo-death infused with Finnish power metal’s major key melodicism, christened with Yngwie-like guitar and keyboard theatrics that made the whole thing crackle with intensity. That album was only a couple months removed from another 2004 Mäenpää classic in Ensiferum’s Iron, the second of two incredible, pioneering albums he made with that band before leaving to pursue Wintersun full time that same year. In a span of just three years and change (’01-’04), Mäenpää had delivered three bonafide classics, exciting albums that made us rethink where metal could go and how it could sound. He seemed poised to among metal’s most admired prolific voices, like Therion’s Christofer Johnsson and Opeth’s Mikael Akerfeldt before him, a guy who would knock out a flurry of awesome works in rapid succession over a decade. Instead, we wouldn’t hear anything new from him until 2012.

When Time I finally arrived in 2012, I found myself enjoying it, but wondering why it took eight years for just three songs proper (two of the album’s five tracks were instrumentals). Even if they were on the long side (13, 8 , and 12 minutes respectively), the lack of more than five tracks on the release made the whole thing come across as some kind of extended EP instead of an album proper. But no matter as I pointed out in my original review, because Time II was on the way, slated at the time for an early 2013 release (by whom, the label or band, no one’s really sure). Well, my snarky prediction that we might not see Time II until 2020 might not be so far off the mark, because in the intervening years Wintersun have focused on some touring and the launching of a wildly successful crowdfunding campaign to build Mäenpää’s much longed after Wintersun studio. Now as I pointed out above, my 2014 article took issue with the band’s attempt to crowdfund against the wishes of their label, but things have changed in the time since. In the autumn of 2016, the band and Nuclear Blast were able to come to terms and negotiate out a resolution that apparently has pleased both parties. No, The Forest Seasons isn’t Time II with a different title, we’re still being promised that far off epic, but at least Mäenpää has delivered new music in the meantime, realizing that another near decade wait would be inexcusable. 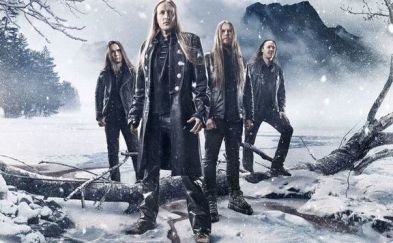 The resulting Indie-Go-Go crowdfunding campaign ran all of this past March. Instead of offering the usual run of merch n’ perks that most bands put up in exchange for donations, the only donation option was for “The Forest Package”, which was essentially the band’s new album The Forest Seasons, its instrumental twin plus a remastered version of Time I (and its instrumental version), as well as the remaster of the debut album along with the Live at Tuska 2013 live album. When this news went out I actually thought that it was a smart move, to just simply offer the die hard Wintersun fan a pre-order of the new album (essentially) plus a host of other Wintersun music that you could get a tidy amount for per person. It wouldn’t appeal to a casual fan like myself, and as a result I suspect many of us scoffed at the band’s overall stated goal of 750,000 Euros (a goal to be reached in chunks —- this being the first of three crowdfunding campaigns), but the band has gotten the last laugh as they netted € 428,310 in just March alone, more than halfway towards their goal. Kudos to them, seriously. I’m not against crowdfunding in metal, I think that its a valid way to go if a band can pull it off. With Mäenpää, the frustration was that he had started clamoring for a crowdfunding attempt after making his fans wait a decade, not to forget the numerous delays and social media posts that grated on everyone’s patience. Its a testament to the man’s music that so many didn’t hold that against him in March.

All that business related history aside, here we are with The Forest Seasons plum in our laps, and if its tracklisting looks a little familiar to you at first, its because Mäenpää has apparently found his preferred format for albums —- a couple songs, make em’ really long (I’d be willing to bet that Time II will follow this format closely). In this case Mäenpää has a built in excuse, that the album is patterned after Vivaldi’s “Four Seasons”, and accordingly so, Wintersun delivers four “suites” for four seasons. I just want to point out how utterly shocking it is that no one has attempted this in the history of metal until now (unless I overlooked something), because this is a concept that was begging to happen. And its one that really suits Mäenpää’s tendency towards melancholic melodies and vague, abstract, all-encompassing lyrics. Speaking of his lyrics, they’re ostensibly about the nature of these individual seasons albeit in a more metal fashion (particularly autumn and winter), mirroring the actual sonnets that Vivaldi wrote (supposedly) to accompany his famed violin suite. But what sets them apart and lends to their metal nature is that they seem to also speak to the condition of someone’s inner turmoil by use of metaphor, something my lyric loving self has to tip his hat to Mäenpää for. I love stuff like that.

The albums most enthralling moments are found in its first two suites, “Awaken from the Dark Slumber (Spring)”, and “The Forest That Weeps (Summer)”, where we find Wintersun in peak form, at times eclipsing anything else they’ve ever done. You have to give “(Spring)” a few minutes into its fourteen minute long journey to really get going because there’s a lot here by way of the intro. Around the 6:27 mark a distant, dissonant riff emerges amidst the atmospheric quiet of stray keyboards and xylophone-like wind chimes, and transitions into the albums first proper headbanging riff progression. Towards the 12:32 mark, we finally get treated to that epic Mäenpää clean vocal, an almost baritone like quality that recalls the best of his work with Ensiferum. By the end of spring, I’m fully engaged and its a strong segue into summer which is not only the best suite of the four here, but in the running for Mäenpää’s most cohesive, devastatingly awesome work ever. Quite bluntly, I love everything about its twelve minutes, from the mournful strings that weep gently across the start of the piece, to the energetic, bouncy riffing that locks us in from the word go. There’s a riff progression motif you’ll hear just before the clean vocal chorus that so simple yet sounds so inspired. And after the mid-song atmospheric break, at the 7:19 mark, we’re treated to a riff sequence that’s the kind of thing people pony up nearly half a million Euros for. Stunning.

Riding such a high from the sounds of spring and summer, its a bit of a bummer that I couldn’t find as much enthusiasm for “Eternal Darkness (Autumn)”, and “Loneliness (Winter)”. You’d figure with the band’s name being Wintersun that these would be home runs, and while they’re not bad by any stretch of the imagination, they don’t inspire the same awe and grandeur of their more flowery siblings. With autumn we get the band’s most blistering attack ever, its furious black metal assault nearly running the gamut of the track’s fourteen minute run time. There are breaks here and there, the song being broken up into “parts”, transitioned by more breathable musical interludes. This piece instantly reminded me of fellow Finns Insomnium and their Winter’s Gate album, both in tonality and sheer aggression —- great for depicting the brutality of winter, which is what made Insomnium’s album so convincing, but I’m not so sure it was the wisest choice for the autumn sequence. The suite’s second half is so reminiscent of Dimmu Borgir riff sequences (complete with Tim Burton-esque orchestrations and Shagrath-like vocals) that I wonder if they weren’t a direct inspiration. Its a trying piece, one that is unforgiving in its attack and devoid of the Wintersun melodicism we all came for, and I just don’t think it succeeds on any level.

After that brutal assault, the quietude and near calm of the winter suite is indeed refreshing, but while Mäenpää’s clean vocals are nice in those moments that juxtapose them against his scathing harsh vox, a whole song built on them is perhaps too much. He’s not a bad clean vocalist (far from it), but he leans too hard on making every phrase sound pained and anguished here, which effectively saps them of all pain and anguish and just leaves them loooonnnngggg and drrrraaawwwnnn ouuuuutttttt. Things perk up quite wonderfully in the instrumental interlude that begins at the eight minute mark, culminating in a beautiful passage towards the tail end of an awesome guitar solo at 8:40. Here, the guitar melody is supported by a mimicking percussion pattern, heavy on the kicks, that gives everything a nice punch that the song desperately needed. Its a moment worth coming back for it, and to be fair, “Loneliness” certainly is captivating on a musical level, because I did enjoy listening to the instrumental version, so maybe it’ll just take some time to get on board with the vocals. I do get a Summoning vibe from parts of this song, a relatively obscure lo-fi black/viking metal one man project who I’ve seen thrown around here and there as a supposed influence for Mäenpää in writing this album.

So if we’re taking my appraisal literally, we’re looking at a fifty-fifty split on The Forest Seasons; but really its an intriguing listen overall, and for those first two suites, an exciting one at that. Whether or not Wintersun fans will agree enough to continue funding Mäenpää’s studio construction efforts will remain to be seen. They’re a contentious bunch at that, often found arguing with the man himself on the official Wintersun Facebook page where I’ve been an occasional lurker. A band shouldn’t be applauded just for releasing an album, but in this case it seems somewhat needed —- good on Mäenpää for releasing something worth discussing and debating, and for simply getting everyone to stop thinking about Time Pt II. I personally wouldn’t mind if there was yet another Wintersun album released before we even got to that one, so as to create more distance and perhaps lift the weight of expectations off of it just a little. I’m sure at some point in retrospect, Axl Rose would’ve loved to have released a new studio album in between 1991 and 2008, if only to give the much beleaguered Chinese Democracy a chance to breathe. This isn’t quite the same epic weight to carry, but Mäenpää could go a long way towards reclaiming any lost good will by being more consistent. This is definitely a start.