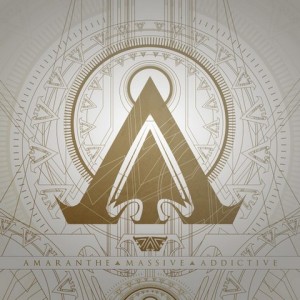 Depending on your perspective of Amaranthe, you’re either really excited for Massive Addictive, or really, really agitated at the mere thought that this unlikely band of Swedes has gotten popular and successful enough to warrant a third album. They are certainly notorious for the sheer contentiousness that surrounds any discussion of who they are and what they do. When I reviewed the band’s previous album, The Nexus, I dug into the career bios for band founders Olof Morck and Jake E Berg, both profiles of musicians that had toiled in relative obscurity for a decade of time before meeting up with Elize Ryd and arriving simultaneously (I’m assuming) at their viola! moment. A cynic could look at Morck and Berg’s creation of Amaranthe as a concoction geared towards commercial viability and broader appeal than anything either had been involved with in the past. They also wouldn’t be that far off the mark. There is something about Amaranthe’s conscious marketing design that raises red flags among the most forgiving of critics and metal fans —- check out one of their numerous absurdly flashy music videos (all directed by that king of gloss, Patric Ullaeus) and try to remember that they’re a metal band.

Beyond image, the band’s self-described “EDM meets metal” approach is built upon a softened metalcore foundation that will resonate with rock audiences (and rock radio at that), along with pure pop songwriting that supplies massive hooks with catchy verses, and two appealing clean singers that do enough to keep the attention of those put off by the rather tame growling vocalist. The “EDM” aspect of their sound only comes into play through the sheen studio production they coat all over their studio albums. In other words, its not interwoven into the fabric of their songwriting the way it was for say, the indie band Tegan and Sara, when they co-wrote two crossover EDM/indie rock songs with DJs Morgan Page and Tiesto; or for a band like The Prodigy who married hard rock sounds with pure techno long before anyone realized it could be done. There’s nothing really wrong with Amaranthe’s approach, except that it exposes their “EDM” tag as somewhat of a misnomer, and to a particularly cynical critic, it could be seen as an easy out for the band to simultaneously disguise and justify just how slick and polished their take on metal is. I’ll provide a more forgiving perspective, one in which the band has grabbed hold of their new hybrid “EDM/Metal” label as an easy, painless way to deflect critics and for the band to distance themselves from other female fronted metal peers that operate in more classicist territory ala Within Temptation.

All that considered, its amazing just how successfully Amaranthe works as a Frankenstein-esque project, stitching together disparate parts to create something that actually works (surely a monster to many). Morck and Berg combine their experiences in both power metal and melo-death to serve as their musical palette, and are malleable in their songwriting to sketch out smart, unobtrusive, accentuating uses for harsh vocals (courtesy of new screamer Henrik Englund), as well plenty of spotlight time for the completely un-metal Elize Ryd’s sugary, ABBA-Swede pop vocals. Ryd is obviously a necessary component in this whole equation, as its through her unremarkable but pleasant vocals that the band channels their poppiest sensibilities, allowing Berg to deliver his clean vocals as a melodic counterpoint or harmony double up. In typical Amaranthe fashion, Englund’s harsh vocals tend to be used as a counterpoint —- he’s only given one opportunity to handle lead vocals (on “An Ordinary Abnormality”), but of course he’s kept off the chorus. Ryd and Berg command the vocal spotlight of Amaranthe, and it has to be said that their voices tend to sound great together, his vocals are melodic and capable enough of soaring highs as hers, but he’s working in a slightly lower register so as to be complementary, not overpowering. I’ve always had mixed feelings on Ryd, finding her the least impressive vocalist of the three —- and I’ve long contended that she’s used metal as an easier springboard to fame and notoriety than she would have had through trying to make it as a pure pop singer. Its not a criticism, just an honest observation that I’m confident other discerning metal fans would agree with. Do an eye/ear test —- does she radiate metal in any way? Kudos to Morck and Berg for sculpting out a role for her and selling it convincingly (seriously, props).

On Massive Addictive, the band don’t change up the formula they first dreamed up on their debut and expanded on The Nexus, seeking only to further refine the elements that worked and ditch the clunky stuff that didn’t (there’s nothing as awful as the bubblegum “Electroheart” on here). The album’s pop highlight is “Trinity”, the second single that smartly balances chunky-riffs and harsh vocals with a exquisitely sculpted chorus boasting a hook that absolutely will not leave your head. Its musical candy, and that’s what we’re here for right? To rot our ears with the musical equivalent of junk food, because try as I might I cannot understand what these lyrics mean in the slightest —- are they talking about their roles as three singers? Hmmm… no that doesn’t seem to fit. What about this stanza, “As we break the chains of might / In dependence of the fire / Give up, this ground sterilized for all time” —- anyone got any ideas? There’s a huge suspicion on my part that Amaranthe often write lyrics phonetically, choosing words for their alliterative value within the context of a lyrical line or stanza rather than their inherent meaning. Its like how Paul McCartney used dummy lyrics for “Yesterday” (“Scrambled eggs, oh, you’ve got such lovely legs”), except that in this case Amaranthe never bothered to go back and revise their diction and you know, actually say something with most of these songs. On “Dynamite”, another album highlight through its rhythmic micro-hooks, we’re given another dose of nonsense in the lyrics during the refrain: “Come on believe me /You can’t deny /From the blaze in my eyes /I am hypnotized and /I can achieve it /I will arise /Like the fire in the sky /I am dynamite”. Look, I know I’m a lyrical grouch of the highest order (imagine me in a trash can and call me Oscar… actually don’t), and I’m aware that this approach works for pop music, but a little more effort on the lyrics of these upbeat tracks wouldn’t go amiss.

Its the slower, mid-paced ballads where the band executes particularly well in all aspects, lyrics included, such as on the surprisingly restrained “True”, where Ryd and Berg are at their emotive best. There’s a wonderful chorus to enjoy there: “This is the time for chasing my desires / Whats in my heart is true”, where both words and melody are extremely well written and emotive, highlighting some really deft songwriting. The same goes for another excellent ballad, “Over and Done”, this more of the embittered and love-lorn variety where a nicely done lyric crops up as well: “Over and done, a changing of seasons / The sun that ignited all our feelings is down”. Berg takes the lead here and its worth noting just how much he stands out apart from other male clean vocalists within metal through his ability to appeal to fans of simple rock music. I suppose I’m suggesting that he has a slightly Americanized bent to his vocals, and that statement in itself will turn off many who are used to power metal’s varied cultural accents and intonations. Fair enough, but it still leaves him as a rarity within metal, alongside other singers like Tom Englund of Evergrey in their ability to crossover to a radio format (surely a boon in Amaranthe’s case). I’m also very partial to the album closer “Exhale”, a catchy song built upon a heavily alliterative chorus where the lyrics are actually well written and seem to suggest someone’s search for spirituality. There’s a pattern here: When the band attempts to write fast, uptempo songs they’re so concerned with the ear-wormy factor in all aspects that they relegate lyrical meaning as an afterthought. I suppose that’s all irrelevant when they’re played live to a dancing crowd (er… no, that’d be headbanging right? What do they do at Amaranthe shows?).

The album isn’t without missteps though, nothing gravely serious but there are a handful of tracks that either don’t work as pop songs or have annoying tendencies that overpower their enjoyable parts. I’m referring specifically to “Danger Zone”, where a boy-band grade chorus is sandwiched between some very boring harsh vocal led verses; as well as “Unreal”, a song that reminds me of the worst aspects of modern day In Flames with the album’s flattest chorus to boot. There’s also something bothersome about “Skyline”, where I guess my expectations were higher because the title reminded me of Bioshock Infinite (skylines… some of you get it) —- a strange reason to cite but also I’m simply bored by the song, unlike the game. Still, on a twelve track album, there are seven songs that deliver precisely what you’d want from Amaranthe , and four of those are actually pretty great. Not a bad ratio overall, and Massive Addictive is the sound of a band getting better at what they’re doing —- even if it may not be everyone’s cup of tea. I’ve written in the past about the value of Amaranthe as a gateway band for non-metal fans to enter our world, and with this album that gateway has only gotten bigger. If someone gets hooked in with a song like “Trinity”, only to find themselves checking out Kamelot via Ryd’s connections to that band, which causes them to love a masterpiece such as The Black Halo as much as I do —- that’s a win. Metal needs gateway bands to survive, and even though Amaranthe are pushing the boundaries of acceptability in our beloved genre, they surely deserve some grudging acknowledgement for filling that role.