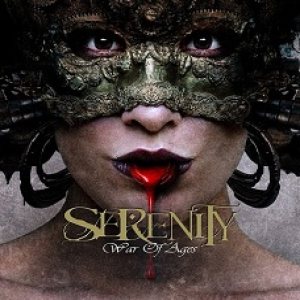 I’m increasingly more aware of how rare it is to stumble upon a band that can utterly transfix my wandering attention span the way Serenity did about a month ago with the release of their spectacular fourth album, War of Ages. The band hails from Austria, a country far more regarded in metal circles as a purveyor of death and black metal bands, most notably Belphegor. Serenity then must be the black sheep of their countrymen, as they specialize in a style of progressive power metal informed by the obvious influences of Kamelot, Sonata Arctica, and maybe even a touch of Avantasia’s latter day hard rock epic strut. This is not to say they are merely the sum of their parts, as Serenity have an identity all their own within the fundamentals of songwriting styles and lyrical concepts — but their influences are a good touchstone and filter for prospective listeners.

It might be hard to ignore the extent to which the Kamelot influence has affected Serenity, down to styles of album cover art, logo design, and band photography. Even the way guitarist and co-primary songwriter Thomas Buchberger prefers an emphasis on understated riffs, elegant melody, and reigned in soloing brings to mind the style of Kamelot guitarist Thomas (!) Youngblood. Vocalist Georg Neuhauser doesn’t sound like Roy Khan per say, but he at times reminds me of a mix between current Kamelot vocalist Tommy Karevik, Sonata Arctica’s Tony Kakko, and Scorpion’s Klaus Meine… a blending that is refined into one of the smoothest vocal deliveries in modern power metal. So yeah, the influences are hard to ignore… but they’re not hard to accept, at least for me anyway. I try to look at it pragmatically, that all bands have influences and starting points, everyone is trying to be uniquely derivative (particularly in a genre like power metal), and only the best will succeed in forging their own identity — a feat which usually takes more than a few records. Serenity succeeded in achieving that by their second album, 2008’s Fallen Sanctuary, which speaks volumes about the level of their abilities as songwriters. 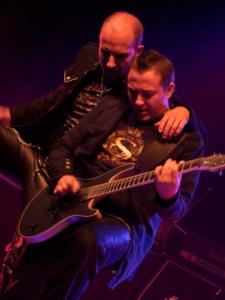 Yes of course I emphasized songwriting, because while the musicianship Serenity display is of the excellent proficiency you’d expect from a European power metal band, the Buchberger/Neuhauser songwriting partnership is the critical heart of Serenity’s success. For anyone who felt/feels that something could potentially be permanently lost from the brilliance that was the Khan/Youngblood songwriting legacy — I’m telling you that the Buchberger/Neuhauser combo strikes right to the heart of the style of music that you and I both love, crave, and sadly can’t seem to find enough of. I’m talking about crisp, melodic, melancholy, triumphant, elegant, and yes actually HEAVY power metal that is written with a head for ambition, an ear for tunefulness, and a writer’s heart for great lyrics. And even though War of Ages is the album that sucked me in as a new fan of the band, I’ve become addicted to the other three albums in their discography as well. And one of the more brilliant examples of all of these aforementioned attributes combining to supreme effect can be found on the bonus track (!) of their 2011 Death & Legacy album, “To India’s Shores”.

As a lyricist, Neuhauser faces the same hurdle Khan did in being an English-as-a-second language writer, but he seems to make a similar effort in the care and choosing of diction, in the use of imagery, and in not burying either his narrator’s voice or his own in piles of metaphors that many lyricists in metal tend to do. It rings of confidence in his writing abilities, and coupled with the fact that Serenity seem hell bent on their songs being narrative voices for historical figures of the past musing on philosophical topics of their own lives or time periods… a great deal of confidence is needed for sure. Don’t let the historical figures thing put you off. The approach isn’t nearly as academic as it might threaten to sound on paper (although Neuhauser has apparently finished a doctorate’s in history, so its an informed voice at work here). I’ll be honest, I don’t really find it all that much of an influence over me when I’m listening to these songs. Historical names aren’t mentioned, you aren’t bludgeoned over the head with dates, places, times, or events… the lyrics at work here could be about anyone’s modern day struggles, relationships, or inner turmoil (okay the new record does have song called “Legacy of Tudors”, but its so good that I’ll just allow the indulgence).

For the War of Ages album, the band made what I can only refer to as a savvy game changer of a decision. Enter into the Serenity lineup one Clémentine Delauney from Lyon, France, as the co-lead vocalist to pair alongside Neuhauser’s powerful voice. This isn’t a gimmick, as they have experimented with a handful of female guest vocalists for select tracks on previous albums — and while the songs and performances have been good (particularly a duet with the always excellent Amanda Somerville on Death and Legacy’s “Changing Fate”), the types of female voices they’ve attempted to pair with Neuhauser never seemed to measure up or alternatively, contrast well with his rich, distinctive tone. I know these women have their fans, but I’ve never been overly impressed with Charlotte Wessels, nor Ailyn from Sirenia, and while Somerville’s duet was excellent, her voice is as strong and full of character as Neuhauser’s and to me it seemed that when they would join together both voices would be fighting for space with no one winning out.

Delauney however, had been singing with the band as their live backing vocalist for a considerable time prior to her finally being invited into the band as a permanent co-vocalist — and her vocal intersections with Neuhauser are noticeably more developed and experienced in terms of tone, delivery, and pure resonance. I think the band suspected this would be the case, and must’ve thought to themselves that their ideas of duet vocals would work better in the future if they had a consistent set of voices pairing up. Smart thinking — because honestly I think she’s an exceptional vocalist, possessing a soprano voice that is effortlessly melodic, rich, and deep yet capable of being ethereal, light, and even fragile when the song calls for it. She utilizes all those strengths on the epic opening track of the War of Ages album, “Wings of Madness”, where her vocals float above Neuhauser’s in the emotional chorus — only to swoop down to darker depths on her own solo verse (her eerily drawn out vocals there remind me of the haunting abilities of Sinéad O’Connor). I’m told that she penned around half of the lyrics on the new album as well, which means that she’s had a direct hand in crafting vocal melodies alongside Neuhauser and I really love that… Because when you’ve listened to a ton of power metal, you can spot the difference between a singer writing the vocal melodies as opposed to an overreaching guitarist, or bassist attempting to dictate what the vocalist does (hello Timo Tolkki and Steve Harris!).

I’ve been checking out the tour dates for the band and they’re disappointingly slim, even for Europe… (I have no delusions about the band getting to launch a full tour in the States — I’ll post a very grateful retraction if that ever happens). I’m not sure what the problem is, but I could venture to guess that these guys have day jobs, and that they try to fit Serenity in whenever they can. That’s understandable and to be expected given the state of things in the industry, but I hope they can do more then just a ten date headliner tour of clubs in Europe. But if that doesn’t, or can’t happen then I’d just have one word of advice for the band if they ever happened to read this: Write more songs, record more albums, document your art with a sense of urgency and ambition. You know its an uphill battle if you’re hoping to headline arenas or chart singles, there are very few Nightwish success stories in your chosen genre. So instead, strike while the creative irons are hot and get this stuff on tape. Build your artistic legacy.

And if you’re a fan of music like this… well, I’m going to do something I almost never do, which is admonish you to actually buy the official physical release or legal download. Look, I love death and black metal as much as the next guy or girl, but for all the hundreds to thousands of death and black metal bands Austria has coughed up and choked on, she’s only given us one Serenity. Bands that make metal like this are rare, and I fear, growing rarer — so if you love this style of metal, actually show your support for the artists that are essentially underdogs in attempting to create it. I shelled out something just short of fifty American to grab this band’s catalog and I look forward to handing over more of my money in their name in the future. Its really hard to think of something else I’ve bought lately in my everyday life that I feel that good about.