As August comes to a close, it signals for me the end of summer. Of course, where I reside in Houston, Texas, its still balls out hot through September, but temperatures and humidity begin to gradually decline as the life affirming months of Fall roll in. With it comes crisp cool air and grey overcast skies, as well as the start of the metal touring season in earnest, the Texas Renaissance Festival, the start of NFL football (go Texans!), and hopefully a slate of new album releases. Its when on cool, autumnal nights I can break out some black metal classics with the old headphones on and become entirely absorbed. Its when I can put on Blackwater Park on the Ipod and take a walk amongst the falling leaves, or listen to Sentenced records — and Agalloch! And when I wake up one morning and find that there’s cold condensation on my windowsill, I know that listening to Immortal will sound so much sweeter when I can wear a goddamned jacket outside. Yeah, if you can’t already tell, I’m big on fall and winter.

Now to be fair, although summer in Houston is extremely oppressive, there is a silver lining amidst all the sweat stained shirts and ickyness. I find that the season has always brought about in me an urge to listen more to hard rock, thrash metal, power metal, and traditional metal. And seeing as how I seem to already have the reputation of being a rather curmudgeonly upholder of the latter two genres, that may come as no surprise to regular readers — but I only stress it to point out that I’ve noticed that my listening habits do seem to be affected by seemingly arbitrary things like climates and seasons. It seems more natural to me to listen to looser, free flowing, more melodic power/trad or greasy thrash metal in the summer than say dense, blistering Norwegian black metal. I realize I’m probably a minority in feeling this way, but take it from me, blasting the Scorpions’ Blackout, or Warbringer’s Worlds Torn Asunder is far more summery than attempting to listen to At the Heart of Winter in the hopes that you can pretend to feel cooler. And I’ve been following that mindset for the past few months, unearthing a heap of classic albums and revisiting them, finding new stuff in those styles such as Grave’s Endless Procession of Souls,  the new Testament (better than Formation in my opinion), and the amazing new record by Canada’s Striker, Armed to the Teeth, which has earned a place on my top ten list for the year for sure despite there being four more months left.

Speaking of summer, there’s the inevitability of Iron Maiden’s North American tours coming to Houston during the hottest part of the year, and this time around it happened on August 18th at the Woodlands Pavilion (of course). This outdoor steam bath of a venue has been the host to Maiden five times now over the past decade and change, and whether in the seats under the pavilion tent, or out on the huge, sculpted “lawn”, you’re guaranteed to sweat enough to refill that empty water bottle you’re clutching. Yeah, gross. Anyway Maiden returned to Houston, as part of their Maiden England tour with the emphasis on the Seventh Son album, and much to my (and my comrades) surprise, the weather cooperated for once, providing overcast skies and a balmy 80 something degree evening. You know what I’m gonna say next, Maiden was fucking killer. By far the best show out of many that I have ever seen them give, Bruce in particular was in immaculate form, and the stage show was the biggest spectacle that I have ever had the pleasure of seeing Maiden provide. I knew it was a breathtaking performance because aside from the giddy, shit eating grins we sported all throughout the show and the state of exaltation immediately afterwards, none of us seemed to dare speak too much about the night at all — as if talking about it would somehow pierce the dream state we were in and bring us all back to our normal cynical selves. I won’t get into a show review, because whats the point? If you saw them on this tour, you know whats up, and if you missed them — I feel for you and only hope it was for a damn good reason. 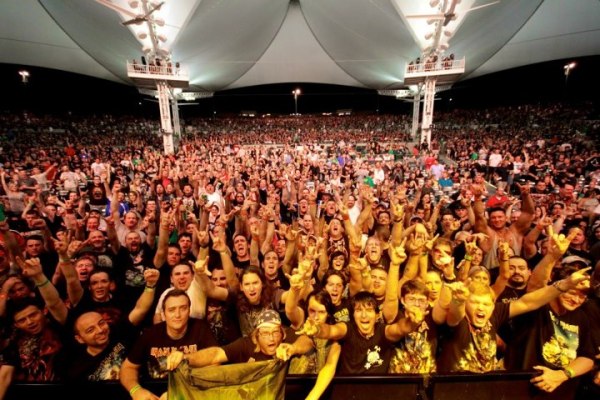 One more thing I’ve stumbled upon late this summer is that I completely slept on the incredibly beautiful 2011 album One For Sorrow by Finland’s Insomnium. Had I been paying more attention to the suggestions of several people last year and given it a listen, it would have been an easy shoe in for a place on 2011’s Top Ten List . Yes perhaps the swirling, melancholic guitars mixed into wonderfully Scandinavian sounding melo-death with touches of modern Enslaved is the exact opposite of what I was cooing about earlier in regards to summer listening, but autumn is near enough, and I can’t think of a better record to usher in the season than this overlooked gem (by many that is, I’ve yet to see a lot of people really talking about this one). I’m addicted from start to finish, and have begun to re-explore the band’s back catalog, albeit still preferring One For Sorrow above any of their albums. Here’s they’ve managed to do something that I had begun to quietly suspect was out of reach for most bands who still dabbled in the admittedly overdone melo-death genre, and that is, to prove that the style still has some paths to explore and new sounds to create. Its difficult to call this pure melo-death, its not, and its better for it — instead Insomnium take the melo-death vocal approach and melt it into a dense musical landscape dominated by ultra-melodic harmonized guitar lines, moody and shifting keyboard arrangements, and at times subtly tribal drum rhythms. All encompassed together with a dreamy production that recalls the very best moments of Opeth’s classics and the aforementioned Enslaved’s Axioma Ethica Odini. Icing on the cake here, the excellent artwork, seriously, a great album sleeve just makes everything that much better. Anyway, enough babbling, check out the album centerpiece “Lay the Ghost to Rest” below, that middle section at 3:10 with the ensuing guitar solo is perhaps one of the most beautifully melancholic sounds ever recorded. Can’t wait to catch these guys on tour in November (opening for Epica and Alestorm of all bands, yeh I don’t get it either)!