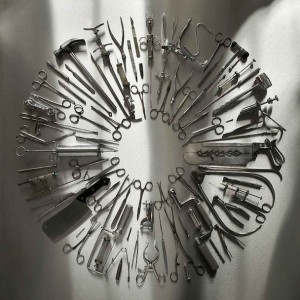 Well its finally here. Years after I first saw Carcass in 2007 at a dingy downtown Houston club playing the headlining slot of a godawful Texas Death Metal Fest and wondered if they were going to attempt to follow up… erm, Swansong, they have returned with a new album at last. And the thing is, my anticipation for it all those years ago when I relished the opportunity to hear “No Love Lost” live has gradually diminished over the years —- I think in part because I wondered what was taking them so long, and that maybe their return was really just about unleashing the classics night after night and making a living off it. Hey, that’s fair enough, they’d have all right to do so if its all they were content with. But noise was made by both Bill Steer and Jeff Walker that they were interested in the idea of doing a new record. So for years we’d read this stuff, doled out in Blabbermouth-sized bites with hopes raised that it could be soon, only to have soon pass by with nothing to show for it. I think that if many of us are totally honest, we all probably stopped caring after awhile.

So it was with great surprise and not a little trepidation that I read the band were actually recording this thing in 2012 on their own dime, and planning to shop it around to labels once it was finished. Nuclear Blast are no dummies, they know that a Carcass record will be at the very least a talking point among metalheads the world over. Most of those fans will open their wallets. And perhaps the biggest surprise of all is that this is a post-reunion album actually worth opening those wallets for. This is perhaps the most enjoyable album in the Carcass discography, and I say that as someone who has an unabashed love for Heartwork. which served as my introduction to the band (yes I know of and have enjoyed Necroticism, Symphonies, and Reek —- calm down). The irritable bowel inducing Pitchfork Media reviewed this album in a surprisingly insightful manner, and remarked that “Surgical Steel is a nostalgic statement, seemingly designed to trigger a Pavlovian response in fans”. At first this irked me, but they present a good case. This is Carcass going back to their first four albums and pulling everything deemed great and defining about them and deciding that these will be the only tools used for the creation of a new album. There’s a huge danger in doing that, most bands that have tried end up sounding flat, but Carcass seems to sidestep this common trip up by focusing squarely on really excellent songwriting.

Bill Steer turns in an all around excellent performance, as expected, his guitars sound as sharp as ever and riffs and solos abound. There are few guitarists in extreme metal that can make you feel like their riffs could actually peel your skin off like Steer (okay maybe Schuldiner as well). He is drawing upon Heatwrork era melodicism here, solos are wild and Iron Maiden-esque, and his riffs often echo motifs of the past yet manage to avoid sounding like retreads. They’ve picked up an excellent drummer in Daniel Wilding, whose percussion is actually able to keep step with Steer’s playing in fluid and unexpected ways. Walker sounds ageless here, and far better than his lackluster performance on Swansong, his vocals raw and feral yet kept purposefully in front of the mix by veteran Carcass producer Colin Richardson. Speaking of which, the production is highly polished, immaculately clean and tight —- lovers of Symphonies era Carcass might find it too clean, but it does work for the rest of us (particular for an album called Surgical Steel).

Highlights abound, the much praised “Captive Bolt Pistol” turns in one of Steers more memorable series of solos —- strings of tornadic like fret patterns over a bed of thrash riffing that recalls Megadeth’s Rust In Peace era. Speaking of which, I get a Deth like vibe on the album closer “Mount of Execution”, which starts off with a memorable slow melodic bend before it launches into a midtempo-ed gallop for the majority of the track, Walker spitting out Mustaine laden vocals that actually do approximate melodic singing at various points. It sorta feels like 1992. “A Congealed Clot of Blood” storms along until the end of the song where we’re treated to a classic tri-tone laden symphony of guitars, capped off by an amazing middle solo… its a rare moment of quiet in an album that is 95% blistering attack. I love “The Master Butcher’s Apron” which is about exactly what the title suggests —- this might feature the best riff on the album, a slow, almost Metallica “Sad But True” echo to the tempo and rhythm guitar pattern (anyone else hearing that?). Wilding’s fills are incredibly complex, the kind of satisfying metal drumming that seems to be all too rare. My favorite moment on the record comes at the end of the best song on offer here, “316 L Grade Surgical Steel”, a perfect Carcass song in every way: Tremendously catchy main riff, Walker’s strategically paced vocals with lyrics turned dark and reflective —- the awesome ending section is worth pointing out alone, Walker barks against stop-start fire of riffs and percussion: “Don’t tell me that you want / Don’t tell me that you need / Don’t tell me that you love / Don’t tell me that you care / Don’t fool yourself”.

So I’ve come away pleasantly surprised. This isn’t changing my metal perspective like Heartwork did all those years ago (along with many other classic records of that era), but its incredibly enjoyable and satisfying to hear new music in the style that Carcass trademarked. Its nice when these things work out.