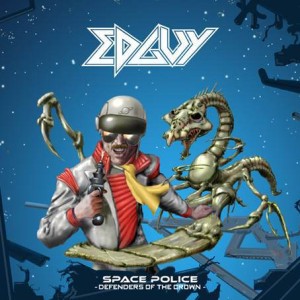 If you’ve kept up with the blog over the past few years, you’ll know that I’m a pretty big Tobias Sammet fan. Yet my unabashed fandom has not prevented me from listening with a critical ear to his songwriting in both Avantasia and Edguy, and in doing so I’ve begun to notice a certain track that his recent works have been taking. There was a noticeable decline with Edguy’s Age of the Joker and last year’s Avantasia offering, The Mystery of Time, and it could be argued that the seeds of this decline for Edguy in particular began with 2008’s Tinnitus Sanctus. That in itself I find rather revealing, because 2008 also ushered in the release of the first Avantasia album in the largely brilliant Scarecrow trilogy —- which suggests that it marked the start of an era in which Sammet began to reserve his best material for the Avantasia records, by default giving Edguy second priority. Sammet himself would balk at that very suggestion and has gone on record stating that the songwriting periods for both projects do not intersect. Hey I’m a fan of the guy, I’ll take him at his word, but I will argue that its fair to suggest that his main musical priority had shifted to Avantasia within the past six years. Its in the math guys: since 2008 —- four Avantasia albums to three for Edguy.

I understood the importance of the Avantasia project to Sammet, and since he was delivering great records I was perfectly willing to tolerate a slight quality hit on the Edguy stuff, which weren’t bad albums by any means (there were a few gems on those records). But when The Mystery of Time happened, I began to see that there was a possibility of the well running dry in terms of Sammet’s seemingly endless capacity for penning excellent songs. It falls then to the newest Edguy release, the typically tongue-in-cheek titled Space Police: Defenders of the Crown, to show that Sammet has rebounded from the songwriting lethargy that has plagued his two most recent releases, and more importantly —- to bring some measure of importance and individuality back to the name Edguy. He can accomplish the former by of course delivering some truly knockout songs, but achieving the latter is a far more ambiguous task —- after all, a side effect of Sammet being the sole songwriter for both bands is that they have begun to blend together in styles. When Edguy records started showing noticeable hard rock influences, Avantasia records followed suit —- so it begs the question: What is Edguy anymore?

The answer appears to be right in front of our faces. Pick up your copy of Space Police and take a long gander at that ludicrous album cover. For the record, I do enjoy the artwork, but that image of a 70’s motorcycle cop pastiche holding an alien (in the most awkward way possible) is the codex that we can use to decipher how Sammet now permanently perceives his work in Edguy. There was a long period of time dating back to the band’s inception when Edguy wrote serious albums about relatively serious subjects. However levity and comic relief became a subtle tradition within Edguy albums dating back to 2000’s mostly dark and serious Mandrake, where a track called “Save Us Now” comic-riffed on drummer Felix Bohnke’s nickname of “Alien Drum Bunny”. Since then we’ve gotten songs about morning wood, self-referential ideas about superheroes, a fantasy of joining the mile high club as a way to deal with flight anxiety,  and of course a bonus track about the life and times of… a bonus track. I’m barely scratching the surface here, and I’m marveling at my own obtuseness in not realizing that Sammet has rather conspicuously separated the veins of his songwriting approach into his two ongoing projects. Since 2006, Avantasia would receive (and monopolize) the far more serious, artistic vein, while Edguy’s increasing blendings of hard rock with traditional power metal served as a perfect soundtrack in which Sammet could further indulge his wacky, silly, Scorpions-inspired vein. 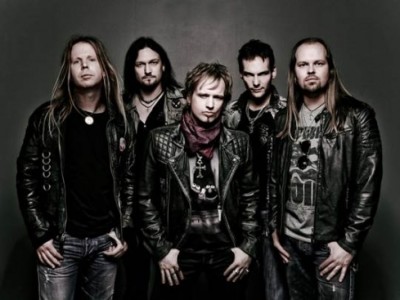 These are permanent changes, and I suspect that Sammet realizes this, but I’m not sure that most of his fans have. If you’re one of the few that can accept the compartmentalizing of his songwriting career, then you’ll be able to accept Space Police for what it is —- namely, the strongest Edguy record of the past eight years. Sammet has successfully shaken off the dust of his past two recordings and delivers some pretty great songs, the most apparent of these being the title track itself. With its tension building, slow-burning verses and propulsive prog-pop chorus, Sammet has penned one of his best Edguy songs to date. Its subject matter is ironic in that its poking fun at fans, or critics (or in my case, one and the same) that tend to demand that the band stick to a particular set of stylistic rules or structures —- all while featuring some of the silliest voice effects on any Edguy song ever (remember the “sung” guitar solo from years ago… its back in a weird way). There’s also the standout single, “Love Tyger”, one of Sammet’s catchiest songs ever, with its “La-La-La-La-Love Tiiiger” refrain becoming perma-stuck in my head for the better part of two weeks now. I love the backing vocals on this tune, with its complementing mix of male and female vocals in what is by now becoming a Sammet trademark, they add a lushness to the sound that is supremely enjoyable. Another gem is the unconventional power ballad “Alone In Myself”, where Sammet trades the usual dramatic build up and Slash-esque guitar solos for an almost soul-influenced lead vocal backed up by some fantastic gospel tinged choir vocals during the refrain. I’m pretty big on Sammet’s ballads, I think he’s one of the best at penning them genre wide, and I love that he’s finding new ways to explore this particular avenue in his songwriting. What an astounding song.

With those three tracks as the pinnacle of a pretty strong album, I’m left wondering why the band (or perhaps more accurately, Nuclear Blast) decided upon “Sabre & Torch” as the lead-off single. Its not a bad song, but its nothing spectacular either (its very construction reminds me of the similarly underwhelming “Ministry of Saints” from Tinnitus Sanctus), its appeal is all but extinguished after a couple spins and I have no real desire to hear it again. I was more than impressed with the guts it took to release “Sleepwalking” as the first single and video of the last Avantasia album, so why go the safe route with Edguy (which is ostensibly a far less conservative project)? I can only assume that its an overt play towards metal fans en masse as opposed to only Edguy/Sammet fans, who I believe would’ve been far more impressed even with the crudely titled “Do Me Like A Caveman”, which for its utterly throwaway title does sport a rather focused, serious sonic palette and a truly vibrant chorus. Likewise goes for “The Realms of Baba Yaga”, where a pretty good groove and some solid riffs help in distracting you from the vagueness of the lyrics (my stab in the dark at them is that its a very Iron Maiden-y “Number of the Beast” type of motif, except with a figure from Slavic myth instead of pitchforked devils). But credit where credit’s due, all parties involved were wise in keeping the Falco “Rock Me Amadeus” cover buried as a deep album cut, right in the middle of the tracklisting in fact. Its placement is well chosen, its execution is amusing and truly evocative of the spirit of the original, and as far as covers go, its an imaginative choice. 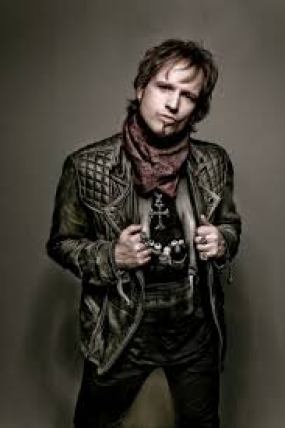 Filling out the rest of the record are some solid album cuts; “Defenders of the Crown”, the second half title track has a chorus that is slightly lacking, yet the rest of the song is packed with enough interesting musicality to make it worth many repeat listens. Same goes for “Shadow Eaters”, an uptempo mix of power and trad metal elements with a pummeling double bass furor throughout, its easily the heaviest track on the record (you know… if that’s the kind of thing you enjoy hearing about). The closing track “The Eternal Wayfarer” attempts to be the epic of the record, with its just under nine minutes in length, but it comes up short of meeting the criteria to be placed alongside past Edguy epic-length classics. Not for lack of trying however, because I should mention that the song is near spectacular from 5:03 to 7:00, where an extremely well written extended bridge features the kind of swirling lead vocal layering that we haven’t heard since the classic title track from Theater of Salvation, a blast of nostalgia that is tastefully done and just plain fun to hear! So there you have it, no real clunkers, and a handful of gems, I’d call that a pretty good outing for Sammet and a rebound for him in the quality department. I’ve noticed I haven’t mentioned any of the other band member’s performances, and that’s not meant to be a snub, as those guys do their job really well and sound great as always. This is a band that lives and dies on the songwriting skills of Sammet, and until they decide to get involved in that realm themselves, it will always be that way.

So its worth reiterating once again, Edguy is Sammet’s lighthearted rock n’ roll playground, and fans should start getting used to this being the way things will always be. The days of serious Edguy records are long over, since 2006 it seems —- so you’d figure we’d all be accepting of this by now, except one of the more unfortunate traits of metal fans of all stripes is an unwillingness to accept change. Check out the YouTube comments for any of these new songs, and you’ll find someone bemoaning the fact that the band has abandoned their classic style and gotten silly. But maybe they’re responding to the hard rock and trad metal influences, which are slowly taking over the sound of a majority of veteran power metal bands. I do feel that power metal is in need of another round of classicism, a re-appropriation of the sound that once defined a generation of bands in the nineties. When Silent Force’s new album sounds closer to Whitesnake than classic Helloween, you know that the state of the genre is in considerable flux. But when it comes to Sammet, I think he’s far removed from the rigidity of the classic style/sound that many of his fans crave (the biggest hint was his subtitling the last Avantasia record “A Rock Epic”, as opposed to “The Metal Opera”). The best that you can hope for as a listener and fan is to find something redeeming about his songwriting on every new release, and thankfully he’s never let me down in that regard.