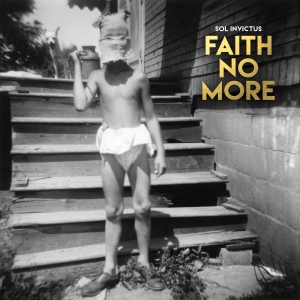 This has been a problematic review to write to say the least. First there were the technical difficulties with a dying laptop to contend with which contributed to the stop/start, piece by piece manner in which it was coming together. Then there was the problem of my ever changing feelings about the album itself, spanning an array of differing, opposing opinions —- sometimes simultaneously. The result was an unfocused, rambling mess that I ended up scraping not just once, but three times. At some point I just decided to skip Sol Invictus as an album to write about altogether, only to come back to it a week later with the realization that it would be disingenuous to myself to ignore the reality of a new album by Faith No More, a band that I loved as much as Maiden, or Megadeth. And that’s exactly what Faith No More were, one of my favorite bands of all time, my obsession with them delving deep and for a considerable length of time. How could I not address the arrival of an album that I long thought impossible, the culmination of a reunion that six years ago seemed as unlikely as Axl Rose becoming prolific?

Faith No More as a band reminded me so much of my high school era misfit circle of friends, a bunch of semi-dirtbag kids with a fondness for absurd, lunatic humor and metal who couldn’t fit in anywhere else, even among stereotypically “weird” school cliques like the theater kids. Our lack of ability to adapt to other groups meant that we somehow found ourselves together, at the bottom of the high school social ladder —- not that we paid it much notice… we didn’t know who the most popular kids in our class were then and didn’t care to find out because we were engrossed in our own worlds. Similarly, Faith No More were a rock band that didn’t fit in with any of their peers —- not their 1992 tour mates Metallica and Guns N’ Roses, not even with other more alternative rock based weirdos like Jane’s Addiction or Smashing Pumpkins (and certainly not with the Nirvanas and Soundgardens). It was just a part of their DNA, they were too weird, a little too unique, and they absolutely didn’t care about fitting in at all. Their classic Mike Patton / Billy Gould / Roddy Bottum / Mike Bordin / Jim Martin The Real Thing – Angel Dust era lineup was a witches brew of bizarre personalities that clashed, numerous unresolved conflicts, and general tension so thick it was entirely noticeable to everyone who worked with or around them.

Journalist Steffan Chirazi wrote of the band’s cast of characters in his brilliant essay in the liner notes of the Who Cares A Lot retrospective compilation,

“…Faith No More only ever did what they wanted, despite the polar opposite personalities within the creative process. Gould was a quiet pressure cooker who would blow his stack every few months in spectacular fashion; Bottum was the floating carefree sort; Bordin would go wherever the comfort and ease of passage seemed greatest; Patton seemed to enjoy the thrill of pissing everybody off in any way necessary; and Martin would often belligerently refuse to entertain his bandmates, just because.”

But through that they persevered and managed to make truly great music on classic albums that were always surprising in their change of musical style and direction. Their pop-infused commercial breakthrough The Real Thing sounded entirely different from their previous two punk-influenced Chuck Mosley helmed efforts, not a stretch when considering it was Patton’s debut as vocalist. Yet instead of delivering a commercially inclined follow-up, the band released Angel Dust, an album so gleefully weird and schizophrenic that it caused their most metalhead leaning member, guitarist Jim Martin, to abruptly quit the band at the end of its supporting tour. This wild musical and stylistic shift from album to album continued: 1995’s King For A Day… Fool For A Lifetime sounded completely different to Angel Dust, and its follow up in 1998’s Album of the Year was another about face in a more cinematic, noir-ish direction. Always changing, no two albums sounding alike, they were a record companies worst nightmare (as has been documented in their interviews from back then), but to me their unapologetic weirdness shone like a beacon in the often staid and conservative patterns that most metal and hard rock bands adhered to.

When they reunited with the Album of the Year lineup around 2009, it seemed like a miracle, some strange confluence of planetary events that somehow got them all to see eye to eye for the first time in their career. In interviews they seemed friendly towards each other, and even happy to be playing with one another again. I expected it would mean a run of tour dates here and there, the odd festival or two and that would be it. The band seemed to think so as well, except that the touring stretched into runs of tour dates in consecutive years, which meant that they quickly grew tired of going on stage and kicking out nothing but old songs. Thus began their gradual lessening of resistance to writing and eventually recording new music, and when it was announced that they were actively in the studio I was over the moon. I don’t know what I was expecting in terms of the end result, seventeen years is a long time between new albums, and I doubt the band really knew either.

This lack of relative perspective due to such a great span of time between releases is ultimately what defines Sol Invictus, for better and worse. Now only a fool would expect the band to go back and listen to what they were doing on Album of the Year and make a conscious writing decision to move away from that —- its likely that it was daunting enough to simply sit in a room and see if they could write together creatively. In that regard the album is a triumph, but as part of the larger Faith No More legacy it tends to fall disappointingly short because so much of the music on here sounds like stuff we’ve heard before. I’ve waffled back and forth to varying degrees on this, but when I hear songs like “Rise of the Fall”, “Cone of Shame”, “Separation Anxiety”, “Sunny Side Up”, “Superhero”, and even the opening title track itself, I’m hearing music that sounds like it could’ve come from King For a Day or Album of the Year, or even more alarmingly, stuff that could’ve been on a Tomahawk album (Patton’s more straight ahead rock side project). That doesn’t mean its inherently bad music (in fact there’s nothing on the album that I could describe as below average), as I’ve found small moments on all those aforementioned songs that I enjoy: Patton’s delightful “I’m only happy when I’m pissing you off” lyric on “Cone of Shame” for starters; the Italian sounding cinescapes on “Rise of the Fall” are evocative; and piano n’ bass jazz verses of “Sunny Side Up” are a welcome change from guitar riffs.

Yet overall I just feel like I’ve heard most of this before, in some other permutation or another —- the moments where they do seem to be venturing into fresh territory are few, but they stand out as the album’s best songs. There’s the early lead-off single “Motherfucker”, it was what provided me with a heady dose of optimism leading up to the album’s release, a three and a half minute pop-perfect single with martial snare percussion and the band’s typically perverse mix of setting rather vulgar language to hypnotic rhythms and a sweetly gorgeous melody. I love it and its one of the band’s all-time greatest songs, its lyrical cadence a prime example of why reviewers who deeply analyze Patton’s lyrics just completely get it wrong (he’s always written his lyrics with phonetics and rhyme structure in mind first, coherence a distant second, something he’s confirmed in interviews quite frequently when asked about the meaning of specific songs —- so many writers ignore this fact). Check this snippet of his work in “Motherfucker”: “Bloated, promoted in an ode to pomp and style / Moistened in the feed while we choke upon the bile / Corner in the market on the geese without the bones / Hushing out the public in a strike without a drone”, a stanza of lyrics not only phonetically matched but set to an alliterative pattern as well… I’m open to all interpretations of what hidden meanings anyone thinks they hold though.

You’d expect that with my emphasis on quality lyricism that Patton’s approach would be anathema to me, but I find it refreshing because he does care about his lyrics and pays attention to them, just in a different way than most others. A similar example can be found in another of the album’s better tracks, “Black Friday”, where over chiming acoustic strumming and uptempo bass Patton dots out “It’s a ride at the salad bar / Predatory lenders / Safari missions far / But you paid for them / To kill your mom”… in context of the music and Patton’s phrasing they work but on paper they read off like pure nonsense, a Faith No More trademark by now. Its followed by “Matador”, one of the more musically adventurous songs on the album, replete with beautiful piano chords and excellent complementary guitar work by Jon Hudson. Faith No More’s musicianship has always been pretty great, nothing to nerd out about, just the kind of quality work a seasoned bunch of pros can deliver: Gould’s bass work is nicely audible as always and he’s kinda a joy to listen to in general, weaving in between keyboards and guitars deftly to allow his personality to rumble through; Bottum’s keyboards are present on most of the album delivering surprising, counterpoint driven patterns; Bordin is on point with percussion as always; and Hudson actually does a pretty inspired job in handling guitar duties, never overshadowing anyone else but sliding in just enough.

Its Patton who is the star of the album though, his voice is ageless and whether he’s screaming at full force or crooning at his smoothest (something that I missed during his years focusing on Fantomas and Tomahawk) he always sounds spectacular. Its nice to hear him in this context once again, with a band that seems ultimately to be his perfect fit, even in the moments where they don’t seem to be firing on all cylinders. As I’ve been listening to this album for a month plus now (can’t even begin to count how many times I’ve spun through it), I’ve felt that my initial mixed to negative reaction has simmered down a bit. I was even enjoying large chunks of it as I was writing this particular review, spinning through it twice more. Its not a bad album by any means, but I’m still firmly sticking by my assessment that its a relatively weaker album in relation to its predecessors simply because it sounds so much like some of them. Faith No More were great because you could never predict what they were going to sound like, you were always surprised, and the music was always great regardless. I feel confident that if they try again with another studio album, they’ll find there way back to that operating state of mind —- that Sol Invictus was the sound of the band clearing out the cobwebs so to speak. There was a part of me that so badly wanted this to be something I could consider as one of the year’s best albums, but once again I’m reminded of the folly of my own expectations.