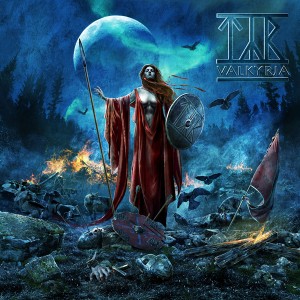 Some of you may already know that I’ve been pretty big on Týr, they are a rarity in metal —- a band with a sound that is truly all their own. I once overheard a conversation on the floor of a Nightwish/Kamelot show where someone was trying to describe Týr to his friend by comparing them to other bands. If I recall correctly, he name dropped Korpiklanni somewhere in the conversation. No… just, no. There are your bog standard, numerous, often copycat folk and “Viking” metal bands, and then there are artists like Týr who elevate the entire subgenre to a level of literary and musical excellence. Even their cover art is goddamned jaw dropping (look at that picture over there and tell me you don’t want a framed poster of that on your wall). In a way the artwork is a microcosm for the band’s sound; punishing yet harmonious, epic yet understated in the most elegant way.

Týr have a commitment to their aesthetic that is not only admirable, it is their greatest strength. There’s nothing ironic or wry about what these guys do, and in a genre that’s been increasingly maligned by terrible tropes and often times plain goofy caricatures (I’m looking at you for both counts Alestorm), Týr’s stoicism and resolve to the underpinnings of their art garners my respect. Like their past few albums, the band’s newest effort, Valkyrja, is a loosely interwoven thematic album about the spiritual, emotional, and yes visceral connection between Viking warriors and women (in the broadest sense of the term). As expected, they treat this subject with care and deference, something that in the hands of lesser bands would likely be turned into a crude amalgam. We already have a Manowar thanks.

This is a spectacular album, continuing a winning streak of great records that began in earnest with 2006’s Ragnarok. Above all Týr seem to value strong, effective songwriting with an emphasis on keeping the verses as memorable as the spectacular choruses they bookend. The musicianship as also immaculate, buoyed by a crisp, clear, and upfront production that keeps guitars sounding fresh and alive, gives the percussion context and depth (you know, when double kick actually kicks and soft cymbal hits sound full and round) —- and then there’s the handling of Týr’s trademark vocal melodies, a layered symphony of vocalist/guitarist Heri Joensen’s multi-tracked vocals along with backing vocalist contributions from both longtime bassist Gunnar Thomsen, and lead guitarist Terji Skibenæs. I’ve seen these guys play live —- they nail the group vocals perfectly, that’s something rare in pure power metal circles, much less the genre-blurring area where Týr exist. You get all that plus a couple of nice surprises on Valkyrja.

My favorite of these surprises came in the form of Týr’s first collaboration with a well known metal vocalist, namely Leaves Eyes’ own Liv Kristine, who shines on the stormy power (and I mean POWER) ballad “The Lay of our Love”. This will make the best songs of the year list without a doubt, its one of those rare songs that made me stop what I was doing while listening and really pay attention, and when it was over, I replayed it again and again. Týr hit me right in my metal guilty pleasure wheel house here, a delicate ballad with an acoustic intro, set to tempo by distantly thundering bass lines with a guitar solo might rank among the most memorable the band has ever composed. Kristine’s vocals are well renowned for her ability to match ethereal tone with sheer vocal heft and power, and when she begins to soar in the chorus alongside Joensen’s rough hewn voice, the theme of the album comes alive. They made a great choice selecting Kristine to handle the guest spot, and it makes me wish I could enjoy her main band more.

Then there’s the short, punchy stomper “Into the Sky”, where Joensen’s vocals do an alternating run with punctuated rhythm guitar riffs and clever percussion during the song’s refrain: “Come my Valkyrie take me into the sky / Up where heroes of the north go when they die”. Its a deceptively simple song —- there’s a lot of complexity going on with the guitar work underneath those gorgeous vocal melodies. And of course it wouldn’t feel like a latter day Týr album without a few well selected covers, this time we’re treated to Iron Maiden’s “Where Eagles Dare” and Pantera’s “Cemetery Gates”. They both work really well, particularly the latter, where you’d think that Phil Anselmo’s vocals would be a odd fit for a guy like Joensen, but he really makes the song his own in a surprising way. Mind you, I still think they’ll have a hard time ever topping their cover of Dio-led Sabbath’s “I”.

Týr don’t set out to reinvent themselves with every album, and that suits me fine. They don’t need to. They belong to a pantheon of metal bands that have the distinction of sounding truly unique. I suppose my only hope for them in the future is that they continue to push themselves to try more experiments like “The Lay of our Love”, not necessarily with female vocalists mind you, but more in terms of attempting songs that morph the expected convention of their sound. They don’t need to press the issue, just keep writing great songs as they have been but every now and then do something to expand upon the formula, while preserving their identity. Valkyrja is a bold step forward to that potential being a reality.