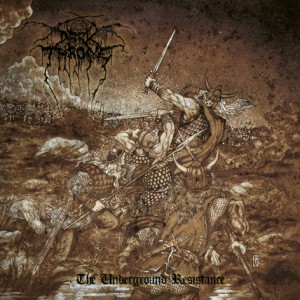 There’s a moment on the new Darkthrone record, the typically Fenriz-esque titled The Underground Resistance, where you might smile and think to yourself, “These cheeky bastards.” Its at the start of “Valkyrie”, where Metallica-esque acoustic guitars chime in a ghost version of the reoccurring melody that carries this really bad-assed musical ode to classic metal of the 80s. Its a moment that I speculate was left in purely to piss off those people who tend to allow themselves to get pissed off over newer Darkthrone music.

I’m sure Fenriz would disagree, but you tell me if there’s a more self-aware artist within extreme metal today? Of Darkthrone, it is generally accepted that Fenriz is the contextual historian, the purist, the idealist — whereas Nocturno Culto, or Ted as I’ll refer to him from now on is the band’s charismatic spiritual force, and the one who you can really believe is fairly oblivious to the perspectives of fans, critics, and anyone else who has an opinion of his band’s works. I wonder if Ted’s approach to Darkthrone is the driving force to keep the music going. Don’t get me wrong, I like Fenriz — (he’s such an endearing personality, how could anyone remotely into metal not?) but I get the feeling that if the whole operation were left up to him, he’d be far more didactic about songwriting and the end results wouldn’t be nearly as fist-pumpingly awesome as the ones we’re getting on The Underground Resistance.

This is not a black metal record. This is a balls to the walls pure heavy metal album in a kaleidoscope of classic metal styles fused together through grimy Darkthrone mirrors. Much has been made, positively and negatively, of the King Diamond-esque wailing vocals found on the pre-release track “Leave No Cross Unturned” (Fenriz has gone on record in saying the vocal was more influenced by Geoff Tate circa 1984 but hell it sounded like the King to me and everyone else). That was as good as any moment from this fairly short album to single out as a microcosm of what Darkthrone are trying to achieve here, but the wider perspective that I gained after hearing the five other cuts is that this is easily the most extroverted, outward music the band has ever made.

I won’t go into typical topics like catchiness and what style the riffs are molded from, because you’re an educated reader and know about the musical path that these guys have been walking down for the past couple albums now. Whats surprising and different about this album is just how much the guys have really reigned in the punkier aspects of their attack, tightened up the riffing, and for the first time ever cleaned up the production (seriously cleaned UP!). The end result of all this is a serious muscling up of the Darkthrone sound, and without realizing that I wanted it, Darkthrone have given me the album that I’ve been craving from them. As much as I have loved and appreciated newer Darkthrone, especially 2010’s Circle the Wagons, I’ve always felt that sonically they were miles away from the musical approach of 80s metal artists that Fenriz himself so championed. What happened with this album is that someone barged into Fenriz’s apartment, threw off whatever was on the turntable and put on a rotation of Stained Class, the first two Metal Church records, and Don’t Break the Oath and yelled at him to only listen to these from now on.

Its absurdly early to be talking about the best albums of 2013, but you’ll see this on a lot of lists to be sure, and of course, you’ll see it left off the lists of a lot of curmudgeons as well. Some people can’t handle Darkthrone’s adamant refusal to return to pure black metal and as a result will not be able to accept reality, which is this: The Underground Resistance is the BEST Darkthrone album of the past decade, and perhaps their most enjoyable record ever. If you don’t have fun listening to this, you’re wrong.