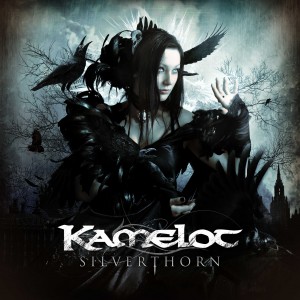 Here we are, on the eve of the American release of Kamelot’s long anticipated new album Silverthorn, their first with new vocalist Tommy Karevik of Seventh Wonder, and only their third album in their career without the vocals of longtime frontman Roy Khan. Speaking of whom, for those of you who had read my article a few months back discussing the loss and legacy of Khan from the lineup, you’ll know that I expressed a healthy degree of skepticism about a Khan-less Kamelot — even though I have become a great admirer of Karevik’s work in Seventh Wonder. I said then that we wouldn’t be able to accurately determine the failure or success of Kamelot’s decision to partner with Karevik until we could listen to a complete full length. For a band that had suffered the departure of a major songwriter such as Khan, it could really be the only true test. I’ve only had Silverthorn for just under a week, but have had it on heavy rotation daily in that short amount of time. I figure for an album that I’m placing a tremendous amount of weight upon (some might say unreasonably so), it was only fair that I give it more than just the standard multiple listens.

I’ll start this off by declaring rather simply that this is the best Kamelot album on offer since 2005’s masterpiece The Black Halo. Karevik’s input as a new primary songwriting force alongside band leader/guitarist Thomas Youngblood and keyboardist Oliver Palotai has rejuvenated the Kamelot sound both into fresh sonic territory, as well as back to its classic Khan-led period.   Gone are the murky, downcast tones of predecessor Poetry for the Poisoned, and there is a togetherness, a continuity that 2007’s Ghost Opera sorely lacked. Those were good albums that had their share of gems apiece, but were slightly marred by a spotty collection of songs that either overreached musically or seemed undercooked melodically. But Silverthorn is not wholly immune from that lingering condition, as there are some tracks that seem unfulfilled and what one could describe as borderline filler, namely the albums title track, its lengthy album concluding trilogy epic “Prodigal Son”, and yes, its lead off single “Sacrimony” (of which in an earlier review of the track itself I hoped would prove to the weakest song on the album).

A couple comments about two of these three troublemakers: First of all, until its last few minutes “Prodigal Son” is a bit of an all over hazy mess, and makes me wish that Youngblood would let go of the need to come up with these types of self-contained “trilogies” that he’s been doing in a fruitless attempt to equal or better their great “Elizabeth Trilogy” from the classic Karma album. “Elizabeth” worked because it was in essence three separate equal-length songs of varying degrees of awesome. “Prodigal Son” suffers in that it seems as though kernels of potentially good ideas were stitched together with atmospheric keyboard orchestration to create an illusion of cohesion. It didn’t work, you can see the seams and to be blunt about there’s nothing particularly epic that stands out overall. Moving on to the title track “Silverthorn”, we come upon the most blatant instance of filler on the album, a bland chorus that unless I’m mistaken is essentially a watered down retread of “Moonlight” from The Black Halo (seriously, even in the way the choirs are arranged, go listen to them back to back). Its not a sin for bands to recycle familiar motifs or styles from older works but filler is filler and its gotta be called out. Finally its worth singling out the two pointless instrumentals that bookend the album on opposite sides — lets lose those for the next record guys, because unless they’re gonna be as great as the very lovely violin-y intro track “Solitaire” from Ghost Opera, I don’t want to hear them.

What makes Silverthorn work however are the inclusion of solid, rocking, classic-Kamelot-styled tracks such as “Ashes to Ashes”, “Torn”, the pompous “Veritas”, and the gorgeous emotional swell of “My Confession”. Speaking of these as a group, they’re not all that far removed from the dark stylings of the past two albums, heavy chug-a-chug rhythm sections, richly dark keyboard arrangements and all. What makes them sound fresh and popping with energy is Youngblood’s purposeful shift back to a more cleaner, uplifting guitar tone and melodic approach that really harkens back to the best of their Khan era work. This singular element was sorely missing from most of the recent albums and its presence all over the majority of this album is smile inducing. “Ashes to Ashes” is an awesome mid-paced crunchy stomper, where Karevik’s nimble vocals provide clever nuance in a chorus that is sneakily catchy — this is the headbanger of the record. The hooky, multifaceted “My Confession” works not only because of the addictive keyboard riffs of Palotai, but the brightly soaring chorus guided by one of Karevik’s best performances that reaches into high registers yet never wavers in its smooth delivery. 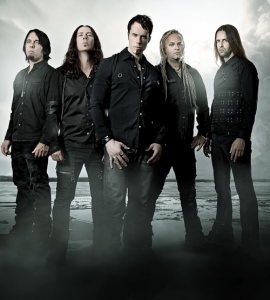 But here’s what I’ve been really wanting to talk about, namely, what makes Silverthorn shine, the true gems of the album. There’s a handful here that start off with the hauntingly perfect “Song for Jolee”, which turned out to be the first song that Karevik and the band collaborated on, as well as being the driving force that led to his invitation to join to the band. This might sit right alongside Kamelot’s Khan-era ballad masterpieces, its that great. Delicate keys tinkle out the fragments of a melody over a bed of orchestration, and Karevik’s emotive vocals usher the song along in a sparse, elegant fashion, with deft, nimble melodies that are built upon the melodic twists and turns provided by the lyrics themselves — in other words, nothing sounds forced. Honestly I don’t know if Khan could do it any better, and while I hesitate to have to compare the two vocally, this is the first moment on the album where Karevik’s vocals sound completely his own. This isn’t to say that he’s ripping off Khan, but there are moments throughout the entirety of the album where he does sound strikingly similar in terms of phrasing. I’ll give him some leeway because for starters their voices are relatively similar, and secondly because the nature of Kamelot’s songwriting is going to naturally bring about memories of Khan. On “Song For Jolee”, Karevik establishes his voice as its own, and fans of Seventh Wonder will recall touches of his work in that band’s ballads.

The cascading refrain of “Falling Like the Fahrenheit” is perhaps the albums most rewarding moment; a rich, layered vocal that is impressive not only for guiding its effortless melodies over rather tricky words, but for the way that it seems to soar purely on the strength of the vocal phrasing — the sombre, stately pacing of the music underneath hardly shifts in tempo in transition from verse to bridge to chorus. The album’s most sublime moment however is the following track, the instant classic “Solitaire”, where a bracing, surging verse section launches you forward into the album’s most urgent, epic, melodically triumphant, and lyrically beautiful chorus — a moment where Karevik’s lyrics nearly match the sheer brilliance of the mighty Khan: “Sometimes when I’m out of reach / And sometimes when I’m there / That is when our souls agree and join in solitaire /Sometimes when my will to love has gone away / That is when I hear your name”. The joyous guitar riff that follows those words is Youngblood circa 2000-2005, a moment of indulgence in the sounds of the band’s past that now sound refreshing and vital.

One final note about Karevik, as I’m sure that most of the reviews online and in various media will focus on his vocals, and perhaps not so much on what he brings to the table as a songwriter in terms of vocal melodies and the quality of his lyrics. Those were the aspects of Roy Khan that really solidified my love of the band and were the things that I feared Kamelot would suffer from the most. Having been a recent convert to the great work Karevik has done in Seventh Wonder, in particular through their latest album, The Great Escape, I found that I was relatively pleased with his contributions to Silverthorn, albeit more for his choices in vocal melodies rather than sheer lyrical poetry. Don’t get me wrong, he delivers good lyrics overall, and in addition to the great lines of “Solitaire”, there’s a really excellent couplet in the chorus for “Song for Jolee” worth mentioning: “One look in the mirror to see / Whats real and fake, Jolee”. That’s Khan-esque in its simple, elegant, and evocative nature. But he does hit and miss throughout the album, for instance I didn’t find the lyrics of “Sacrimony” to be the best they could have been, and perhaps it was the rushed way that song was put together that resulted in that (it was reportedly the final song written for the album). All said, it was a fine effort by Karevik for the first time around, and knowing what he has done in Seventh Wonder gives me confidence that he will be even better on the next album. He might never replace Khan in that regard, the void is too great, but he seems to understand the level of quality that Kamelot fans demand, and maybe that’s all we should be asking of him as a lyricist, and as a vocalist.