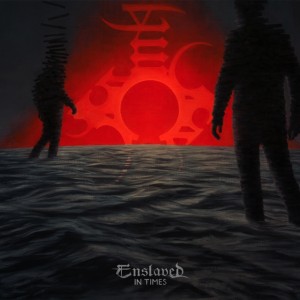 So I’ve finally gotten to listen Enslaved’s new album enough times to confidently offer up an opinion, but the first thought that comes to mind is that they have sneakily become metal’s most hard to predict band. I can never anticipate what they’re going to try next, and am always more than a little surprised when I finally get to hear what that is. The thing is, if you laid out their discography on a timeline, there’s a reasonable amount of linearity: the early 90s second wave Norwegian black metal roots, the switch to English language lyrics on 2001’s Monumension, the introduction of progressive elements on Below the Lights and Isa and the full blown era of prog-rock infusions ala Pink Floyd/King Crimson with 2009’s Vertebrae and onwards. Its in this latter era where the band have decided to throw out curveballs left and right, such as their reversion back to almost completely brutal, punishing black metal on Axioma Ethica Odini, a move that made some of us think that they had stretched the boundaries of their sound far enough and were making a move back towards their roots. But then RIITIIR happened, a big collossal “What the Hell?!” full of some rather Alice in Chains inspired hard rock melody, opulent Slash-esque guitar solos and more Herbrand Larsen than you’ve ever bargained for. It was a good, at times great album, and it set in concrete the idea that the band would remain vastly unpredictable from now on.

Their newest, In Times, is a further reinforcement of that notion; its certainly heavier than RIITIIR and at times matches the feral intensities of Axioma, but its simultaneously more smoothly melodic than anything off of Vertebrae. Its bothersome to me to have to contextualize a new album in relation to a string of its past predecessors, mainly because if you haven’t heard those other albums you’ll have no idea what I’m talking about. It just happens to be the easiest way to frame things with a band as diabolically complex as Enslaved. That actually got me thinking though, that perhaps In Times is an ideal starting point for anyone new to the band —- of which I’m sure there must be a few people around (right?). I say this because not only is In Times a phenomenal album, perhaps my personal favorite of theirs since Isa, but its their most accessible and representative album as well. There are only six songs here, and they’re all over eight minutes a piece, which may seem long and tedious on paper I know —- the band sidestep that by all but eliminating their more tedious, proggy-exploration moments that they’ve been prone to indulging in recently. The result is an album big on heavy riffs, wildly unrestrained guitar work, colorful washes of keyboard accompaniment, and a fifty/fifty mix of brutal and clean vocals that deliver hooks galore. It almost seems like I’m describing a Blind Guardian album (uh… minus the brutal vocals thing).

Its fair to say that In Times outright success is due in large part to the aforementioned Herbrand Larsen widening his range and scope as the band’s clean co-vocalist. In the past, Larsen’s moments tended to work like Dimmu Borgir-ian spot fills; those moments of cinematic, heavens opening up juxtaposition sandwiched in between brutal vocal sections. He had a particularly distinctive delivery in these moments, one that he repeated over and over and over again. There was a samey-ness to his singing, a monotone uniformity throughout the run of his vocal lines that almost came across as an instrument rather than actual singing, a role normally reserved for extreme metal vocals. He did attempt to change slightly, as seen on RIITIIR’s more accessible moments, incorporating in a little more in the way of variations in delivery, but it was still largely Larsen working in a comfort zone. Here however, he takes his quantum leap, a complete re-working of his role as co-vocalist and in the sculpting of his vocal melodies.

This stems from the songwriting itself, where clean vocal passages are underscored by a rhythm section that actually plays rhythmically in the standard sense. Take his vocal passages in “Building With Fire”, where Larsen sings over what comes across as almost alternative rock styled staggered riffing —- this is not to say it “sounds” like that, the guitar tone is rather typically modern Enslaved. Its a small touch, but one that allows Larsen to carry the song entirely on his own, rather than be subject to the irregular riff patterns that Grutle Kjellson can growl over with relative ease. An expanded role for Larsen means that these songs are not lacking in vocal hook laden refrains, a feature that allows the band to play around with degrees of heaviness and sonic brutality in a myriad of creative ways. On the album opener “Thurisaz Dreaming”, Larsen is emotive and expressive in his extended refrain sections, a perfect foil for Kjellson’s screaming bookends. He gets a star turn on “One Thousand Days of Rain”, its chorus the most gloriously pop moment of Enslaved’s twenty plus year career. Its elegantly worded refrain of “Wandering down the icy path / The sun is dying / The mother is crying” will stay with you after your first listen, forming the delicious nougat center of a great song you’ll keep coming back to again and again.

On that very song, Larsen trades off verses and sometimes single lines with Kjellson, over the undulating pulse of accelerating waves of melodic riffs and open chord figures. Kjellson (or Brutal Grutle as I enjoy calling him) delivers his extreme vocals like the bowling ball of howling fury that he always is, his voice far more wild and unrestrained than someone like Shagrath, or even Nergal. His tone is entirely his own, he sounds only like himself, and he doesn’t really change his approach (depending on your perspective, that’s either for better or worse I suppose). What he does succeed in achieving is a sense of agelessness, there’s no sense that his ability to reach peak intensity has diminished. His ability to deliver vocals like these this late in his career is a testament to whatever he’s been doing to keep his throat working.

As always, the musicianship is just utterly impressive, drummer Cato Bekkevold a force of nature unto himself, his fills and accent choices entrancing in their own right. I love his cymbal work towards the end of “Building With Fire”, or his militant snare drumming in “Nauthir Bleeding”, and his overall creative vision towards his role within Enslaved’s sound. He never smothers anything in double bass when its not needed, and keeps blast beats in reserve as something to be used sparingly only. But its guitarists Ivar Bjornson and Arve Isdal who really capture my attention. Isdal (“Ice Dale”) is an interesting guitarist within extreme metal, a guy more influenced by non-metal avant-pop players like U2’s Edge and Floyd’s David Gilmour, even alternative rock players like John Frusciante and Trey Spruance. Those seem like silly names to throw around as influences for a Norwegian guy in a band called Enslaved, but when you listen to his largely open chord permutations, you can hear that they ring true. Bjornson brings the proverbial sledge hammer in the form of muscular, cleanly written riffs, and here he sculpts them like a master smith at work. Check out the devastating high note progression in “Building With Fire” at the 1:53 minute mark, its one of my favorite moments on the album and I can’t get enough of how those open chord sequences flow directly into teeth gnashing outro riffs.

There are times when you know that you’ll keep coming back to an album weeks and months from now, and I will return to In Times with little effort needed. It wasn’t that way with RIITIIR, a record I found I had to be precisely in the mood for. Sometimes accessible doesn’t necessarily equate to something negative, and here Enslaved have the potential to cross over into a few other pools of potential listeners. I actually think I need to give it a few days of rest before listening again, I might be on the verge of overplaying it (five complete play throughs for this review alone). It is easily in contention for that distant album of the year list which I realize now is an absurdly short eight months away. All my earlier talk of Enslaved’s unpredictability means that I have no idea how they’re going to follow this album up a few years from now. Its actually not too crazy to suggest that they might revisit some of their earlier Viking/folk influenced sounds of eras bygone. That being said, unpredictability works both ways, there’s no guarantee I’ll enjoy the next thing they do as much as this one, so I’ll savor this while it lasts.