After a rather slow opening to 2012 metal wise, things are starting to pick up here at the dawn of spring with a flurry of relatively new releases that I’ve been listening to in random fashion for the past few weeks. I have quite a few on my list that I want to devote individual reviews to and will be in the coming weeks, and surprisingly the most noticeable genre being represented amongst these new releases is power and trad metal. So to get a jump on the ever-growing stack of albums that will need reviewing, I’m presenting my opinions on three selections from the aforementioned genres in one go – starting with the seemingly eternal German trad/power metal vets in Rage:

Rage – 21: Look, if you know about Rage, then you should already understand what to expect from a new album by them, Accept-like German teutonic heavy metal meets Megadeth-ish thrash and speed, stuff your experimental sounds and modern influences nonsense. There’s been a few things here and there with symphonies, some detailed progression within albums that would only be noticeable to die-hards, but one the whole, Rage delivers meat and potatoes German heavy metal on a rather consistent basis. Unfortunately, one of the side effects of such reliability in the metal world is that unless your band features a true gem of a songwriter/songwriting team, you’re going to end up delivering way more average to good albums, rather than great ones. I’ve always wanted to love Rage, and I check out each new album in hopes that they deliver a knock out like they almost did with 2002’s Unity – and this might be the closest they’ve come since then. Their newest, 21, is a good, not great record, but it does have a pair of truly great metal anthems that are worth talking about: namely the slow burning “Feel My Pain” and the truly stellar masterpiece “Forever Dead”, which by itself is going to be responsible for my including a top ten songs list alongside the albums list at the end of this year. What a track, check it out here:

The long hoped for reunion of two power metal icons, Michael Kiske and Kai Hansen – I think we all figured that either it’d end up as a Helloween reunion tour cash grab or never at all. However fate or Tobias Sammet, you pick, intervened and brought these two together on stages across the world during Avantasia’s short run of tourdates during December of 2010. Their rekindled musical union took a further turn upon Kiske inviting Hansen to join him in his newly forming band Unisonic. Just a brief warning, the end result isn’t Keeper-era Helloween, or even remotely close to anything resembling the classic power metal archetype these guys helped to create. What you get is a record full of brightly produced, melody heavy, catchy guitar rock with Kiske’s smooth vocal delivery at the forefront that overall most vividly invokes the better parts of Van Hagar with some Scorpions, Styx, and general AOR stylings. Here’s the thing with this album, some people might be disappointed because they had differing expectations, but for anyone who goes in with an open mind and a general appreciation for good hard rock with a bit of a positive slant to it will be greatly rewarded. I really am enjoying this record, its nothing earth shattering, but its a great listen when you’re in the mood for something easy, ultra-melodic, catchy and dare I say it, happy sounding.  The real highlights here are “I’ve Tried” and “Never Change Me”, the former a moody, shifting song with a panoramic chorus that only Kiske could deliver; while the latter features one of the most compulsively catchy melodic hooks you’ll hear all year. Another one to YouTube up is “Never Too Late”, which features a Green Day-ish pop-punky vibe to it which is alarming at first listen but not distasteful in the slightest. Honestly, I’m surprised at my reaction to this album, I didn’t think much of it upon my initial listening experience but it has rapidly grown on me. 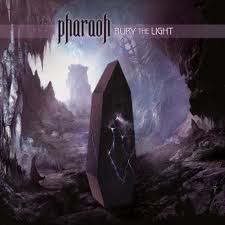 I’ve been vaguely aware of the name Pharaoh over the years, but it was one of those things that I just saw in passing and never bothered to investigate. Finally I heard a track of this newly released album on a favorite metal radio show and my jaw dropped. These guys do a blend of old school styled NWOBHM meets darkened trad metal, and yet avoid taking the cliche filled routes by the numerous crop of current retro-styled bands popping up everywhere. You get the feeling when listening to Bury the Light that this is the only metal these guys could, and would want to play. Strong hints of Metal Church, classic Metallica, and particularly classic Savatage abound, the latter most noticeable because the vocalist during high notes is a dead ringer for Jon Oliva. That’s fine by me, its nice to have a modern band around that draws serious influence from one of trad metal’s great yet often forgotten giants – long overdue really. Its hard to single out highlights because I find myself content to simply let this play from start to finish, but upon closer inspection I’ll spotlight for YouTube look-up purposes the dramatic building up found in “The Spider’s Thread”, where the finale section of the song delivers a payoff that touches the very nature of what I love about metal. The longest track on the record, “The Year of the Blizzard” manages to justify being the epic of the album by featuring some very old school flourishes: mellow acoustic sections, twisting guitar harmony-led passages over tortured Oliva-esque vocals all while still managing to deliver precision thrash. “Cry” even has some moments that echo the best of classic Blind Guardian without sounding anything remotely like the German legends – and if you’re thinking that all these references to other bands makes Pharaoh seem a bit unoriginal, I feel it necessary to justify the comparisons by emphasizing just how truly fresh this album feels, and to simply let the comparisons give you an idea of what traditions this band seems to be drawing from. Sure its not reinventing the wheel, but well written and inspired metal doesn’t need to. Its hard to not see this album being in my top ten list at the end of the year.